This video by Rosemary Meza-DesPlas features her artwork and a spoken word performance that speaks to politics and gender-based burdens. 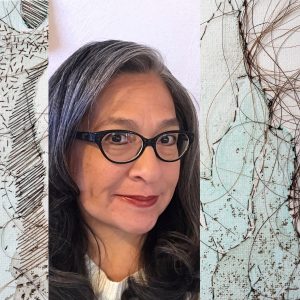 Farmington, New Mexico-based Latina, Rosemary Meza-DesPlas is known for exploring gender, sexuality, identity, and socio-political topics in her visual artwork, writings, and spoken word performances. She received an MFA from the Maryland Institute College of Art (Hoffberger School of Painting) and a BFA from The University of North Texas. In 2019, Rosemary Meza-DesPlas was featured in Santa Fe, NM’s the/magazine as “12 Artists in New Mexico to Know Now.”

The cornerstone of her artwork is the female experience within a patriarchal society. As a woman, daily navigation of our world is a precarious tight-rope walk. The use of portraiture to discuss gender-based burdens personalizes the political. Intricate drawings are created by meticulous stitching of human hair. Through on-site drawing installations and watercolor paintings, Meza-DesPlas evokes intellectual and visceral responses to socio-cultural burdens endured by women. These burdens and their subsequent impact on contemporary culture are interpreted through a global lens. Her artwork has been exhibited at numerous galleries and museums throughout the United States, Europe, and Asia. Her work has been written about in several publications including the Huffington Post, Wall Street International, and Interview Magazine.