Quanda Johnson deals in trauma. She make things, perform things, presents things that interrogate her own trauma and that of her ancestors. Black women are almost always at the center of trauma, balancing on their shoulders and backs the weight of the sublime, “the beautiful monster” that crushes and molds, pollutes and purifies, turning their existence in the Atlantic world into something both unbearable and born. A new and mystical invention.

Trauerspiel: Subject into Nonbeing (2021) is becoming Johnson’s “dissertative” meditation on trauma. Poetic observation, visual excavation, and performance, it is taken from Simon Gikandi’s Slavery and the Culture of Taste (2011) and speaks to the void in which Black being, particularly Black female ontology often finds itself swallowed. It consists of three distinct components: a short film, Trauerspiel: subject into non-being (2020); a poem excerpt from In Search of Negroland: a different study of the negro race (2016); and artworks from The Ballad of Anthony Crawford: a love letter to america (2017).

Stand with our backs to the shore, faces to the surf

Eyes searching the horizon
Searching for a boundary
A limit beyond the limits of our world
The too large sea licks us clean of fear, clear of protest
There be dragons

But along with the dragons:
Ivory from the Ivory Coast
Gold from the Gold Coast
Diamonds from the African South
Iron from the Congo
Slaves from the Slave Coast
Glazed cotton from the West of Africa
And spices and women –
Black women with too soft skin
Who smell of cloves and nutmeg and ginger and cocoa and cinnamon and pepper…
Intoxicating

Along with the women, in whom we can put our sex without censure
Thanks to our fire power
Wealth and more wealth propel us across the sea,
The sea whose vista mocks us
The sea where the dragons
Threaten to swallow us whole

But we dream on and sail on and if we don’t fall off the edge,
We find Land –
El Dorado with…
Emeralds from Peru
Silver from Mexico
Sugar Sugar Sugar to sweeten our lives
Tobacco
Indigo
Rice
Cotton
And people?  Thousands of Brown and Black people to bend to our will
To work this new world
This new land

No room in the old world, but in this new,
We can stretch and grow, and work and
Get these new people to work,
Work our new land

Back across the sea
Slaves from the Slave Coast
Inexhaustible heathen

Bring them by the tens of thousands, and if death comes, it comes
We bring more –
More black and brown bodies to cultivate our wealth
To feed our sex and create more wealth

Awashed in the New World 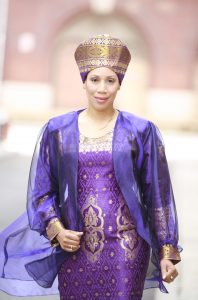 Quanda Johnson (she/her/hers), a PhD candidate in Interdisciplinary Theatre Studies at UW-Madison, examines the African diaspora/performance activism. As a Fulbright Scholar (2013-2014), she coalesced Nova Scotia Africadian communities to chronicle their history through her original theatrical concert, Beyond the Veil of the Sorrow Songs. Ms. Johnson’s creative endeavors, including Verisimilitudes: A Journey Through Art Song in Black, Brown, and Tan, champion marginalized voices and gender equity.