An epic story of land, Indigenous ancestry, and the formation of a national identity, Carnival Lights explores the survival, transformation, and resiliency of a fictive Ojibwe family from 1860-2019. Deftly intertwining the perseverance and love of the Braun family (a German surname given to the family by a government agent) through the generations as they are impacted by genocidal and assimilationist historical figures and policies, the author has created a unique style that blends fiction with historical fact to create a story specific to Minnesota that is also emblematic of the broader issues of Missing and Murdered Indigenous Women across North America. At times lyrical and elegiac, and at other times stark and graphic, the main story is set in 1969. It chronicles two teenage Ojibwe cousins who set out on a journey to Minneapolis and become immersed in the underground world of the homeless, runaway, and exploited. During their travels, the girls bring alive the culture, humanity, and struggles specific to the first people of this land who are too often stereotyped and invisible. Carnival Lights is an honest and compelling story about Native people’s struggle to hold onto their land, family, and culture that ranges from reverie to nightmare and back again. It is a timely book for a country in need of deep healing. 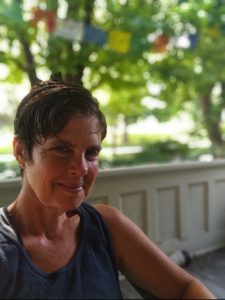 Christine Stark is a Native (Anishinaabe & Cherokee) award-winning writer, researcher, visual artist, and national and international speaker. Her first novel, Nickels: A Tale of Dissociation, was a Lambda Literary Finalist. Her essays, poems, academic writing, and creative non-fiction have appeared in numerous publications, including The Palgrave International Handbook on Trafficking, University of Pennsylvania Law Review; Dignity Journal; The WIP; Florida Review; The Chalk Circle: Intercultural Prize-Winning Essays; When We Became Weavers: Queer Female Poets on the Midwest Experience; Hawk and Handsaw: The Journal of Creative Sustainability; and many others. Her poem, “Momma’s Song,” was recorded by Fred Ho and the Afro Asian Music Ensemble as a double manga CD. She is also a co-editor of Not for Sale: Feminists Resisting Prostitution and Pornography; and a co-author of the ground-breaking research “Garden of Truth: The Prostitution and Trafficking of Native Women in Minnesota.” Primary research she conducted with Native women survivors of prostitution and trafficking on the ships in Duluth, Minnesota is included in her article “Strategies to Restore Justice for Sex Trafficked Native Women.” She is also co-author and co-researcher of “Evidence of Survivor, Agency, and Researcher Collaboration: An Example of an Emerging Model of Survivor Wellbeing.”

Her writing has been nominated twice for a Pushcart Prize. In 2012 she was named a “Changemaker” by the Women’s Press and was a Loft Series Mentor Finalist. In 2019 she received the International Social Justice Citizen Award from the International Leadership Institute. She has appeared in numerous media, including NPR, MPR, PBS, Justice Talking, and Robin Morgan’s radio show. She has spoken at law schools, conferences, rallies, and at the United Nations (four times). She has taught writing and humanity courses at universities and community colleges for 18 years and worked as a Two-Spirit program director at Minnesota Indian Women’s Resource Center. Currently, she facilitates art and writing groups at Breaking Free in St. Paul, consults with a variety of local and national organizations, and teaches writing and literature at Anoka Ramsey Community College. She is a member of the Minnesota Missing and Murdered Indigenous Women Taskforce. She has an MFA in Writing and an MSW. Her second novel, Carnival Lights, will be published in February, 2021.