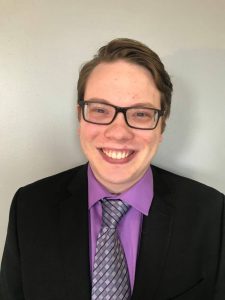 Jason Roth (he/him/his) is an awardee of the UW System Women’s and Gender Studies Consortium, for his project, “Who Gets to Represent Whom.”

Jason Roth is a graduating Senior from the University of Wisconsin-Platteville with a degree in Women, Gender, and Sexuality Studies. He started his time at UW-Platteville becoming active with the Alliance, the institution’s LGBTQ+ and ally student organization. Shortly after, he began working for the Doyle Center for Gender and Sexuality and the Department of Campus Climate. It was through this work that Jason discovered his passion for social justice. UW-Platteville does not traditionally offer Women and Gender Studies as a degree program; however, through the independently contracted major option, he was able to declare a major in Women, Gender, and Sexuality Studies with a Gay and Lesbian Studies certificate. His areas of study while at UW-Platteville included representation of marginalized identities, advocacy work for Two-Spirit identities, and masculinity studies. Jason appreciates everyone at UW-Platteville who has helped him along his journey, and he is excited for the next chapter of his life.