“My visual concerns run the gamut from careful study to poetic, symbolic and sometimes political representations of nature and human nature.”

How To Be A Feminist Watercolor Artist

Helen Klebesadel has always thought of her art research as the place where her visual art and her belief in feminism merge. In the video below, Helen shares a brief overview of how feminism has influenced her art over the last 40 years by sharing a few images of major bodies of her art that represent key themes over time. She finishes up with a visit to her studio and a discussion of her current art research. 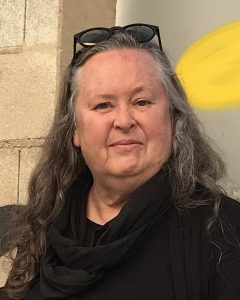 Helen Klebesadel is an artist, an educator, and an activist. Raised in rural Wisconsin, Helen now maintains a studio in Madison, Wisconsin.  She is best known for her environmental and women centered watercolors.  Helen’s watercolors push the traditional boundaries of the medium in scale, content, and technique. Ranging in size from the intimate to the monumental, her paintings are transparent watercolors on paper and canvas. She starts with detailed drawings and developing the images with layer upon layer of color washes and dry brush technique mixed with occasional areas of wet-into-wet spontaneity.

Klebesadel exhibits her work nationally and internationally, including having shown her watercolors displayed in several American Embassies through the Arts in the Embassies Program. The Bergstrom-Mahler Museum presented her first solo museum exhibition in 1994.   Her artwork is represented in the art collections of the American Council on Education, the Racine Art Museum, West Bend Mutual Insurance, Lawrence University, University of Wisconsin Hospitals and Clinics, UW-Whitewater, UW-Madison Trout Lake Research Center, Central Wisconsin Center, the Dubuque Medical Clinic, the St. Francis Medical Center in Grand Island, Nebraska and numerous private collections. Several of her watercolors addressing environmental themes are in the collections of the University of Wisconsin-Madison’s Nelson Institute for Environmental Studies.

Klebesadel  is co-facilitator of the Exquisite Uterus Project with Green Bay artist Alison Gates, the project, focused on reproductive justice, has over 200 participants from thirty states and four countries.  Since 2014 she continues to exhibit and expand another collaborative project created with artist Mary Kay Neumann called The Flowers Are Burning: An Art and Climate Justice Project .  This project uses their art and website to address current climate change issues.

Helen Klebesadel’s watercolors and prose have been published in Frontiers, FeministStudies, Interweave, CALYX  and Femspec.

She has been included in many exhibition catalogues, as well as in the 2022 book, A Creative Place:  The History of Wisconsin Art.

Klebesadel served as a member of  the  Wisconsin Arts Board from 2006-2013, and on the Madison City Arts Commission from 2003-2006.  Helen has also served in leadership roles on the boards of the Grassroots Leadership College, and the National Women’s Studies Association.  Helen Klebesadel is also a past national president of the national Women’s Caucus for Art (1994-96).  In 2021 she was the recipient of the national Women’s Caucus for Art International Caucus’s United Nations Program Honor Roll recognition.

Helen Klebesadel’s artworks can be seen on her website at: klebesadel.com

Her digital profile from 2021 can also be seen here: https://consortium.gws.wisc.edu/conference/artist-exhibition/helen-klebesadel/